This two-part experiential workshop will present and demonstrate one-to-one psychodrama techniques that can be used when working with individuals via online teletherapy platforms. It will focus particularly on two approaches developed by Brazilian psychodramatists, but little known outside of Brazil, and their adaptation to the current challenges of working from a distance through a computer screen. While they will be thematically connected, participants can opt to attend only one of the two sessions as a stand-alone.

Part 1. The theory and practice of ‘internal psychodrama’

Part 1 will focus on ‘Internal psychodrama’. This technique works with internal and symbolic dramatic action, with the client visualizing and experiencing the action, but without physically executing it. Instead, the dramatic interaction with characters happens internally/mentally. It has been developed and furthered by psychodramatists such as Bustos, Dias, Godoy and Fonseca.

Part 2. The theory and practice of ‘relationship psychotherapy’

Part 2 will focus on ‘Relationship psychotherapy’. This is a working modality developed by Jose Fonseca, a technique derived from analytical therapy and psychodrama, and described as a minimalist version of psychodrama. The expression ‘relationship psychotherapy’ emphasizes the relational philosophy (Martin Buber) within the therapeutic work, and it deals with the client-therapist relationship (here and now), the client’s external relationships, and the relationships from the client’s internal world (the client’s internal sociometry). Scenes are played out verbally; there is no external dramatic action, no stage or stage markings, and no physical interaction.

ZOLI FIGUSCH (UK) is a psychodrama psychotherapist, supervisor and trainer, a member of the British Psychodrama Association (BPA) and the United Kingdom Council for Psychotherapy (UKCP). As their representative to FEPTO (The Federation of European Psychodrama Training Organizations), Zoli is a member of the BPA’s Executive Committee. He is also a member of the North-West Psychodrama Association, and the series editor of the newly re-published series of J.L. Moreno’s books. For his involvement with this work, in 2013 he received the ASGPP’s  ’Zerka T. Moreno’ Award.  Zoli is the editor of three psychodrama books: ‘Sambadrama – The Arena of Brazilian Psychodrama’; ‘From one-to-one psychodrama to large group socio-psychodrama’; and ‘The J.L. Moreno memorial photo album’. Zoli works as a principal psychotherapist at a specialist psychotherapy service for clients with personality disorders, in Maidstone, UK. 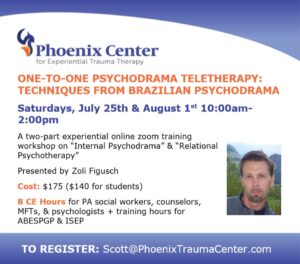 Sign up to receive timely, useful information in your inbox.

Theme by Anders Noren — Up ↑